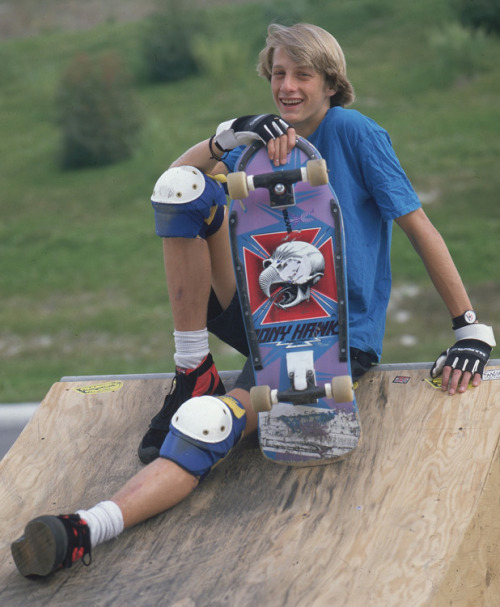 (If you think you know your stuff when it comes to Celebrities, see if you can pass our Guess The Celebrity Quiz!)

This picture is a rarely seen look at Tony Hawk in his childhood. The photograph is believed to have been taken in 1986 of Hawk at his local skate park. Tony Hawk was born May 12th 1968 in Carlsbad, California, though, he grew up in San Diego.

Even at a young age he displayed his ability to excel in many areas. He was quite intelligent, participating in advanced placement courses in school. Physically, he was also gifted as he participated in baseball and his signature sport, skateboarding. Hawk was so good at skateboarding that at the age of fourteen he became a professional. He would go on from there by winning the title of National Skateboard Association world champion for a whole twelve years in a row. In 1999 Hawk was able to perform a trick that many professional skateboarders could only dream of. He managed to land a successful 900 degree rotation in the air. This was a moment Hawk would often point to as the pinnacle of his career.

In the year of 2009, President Obama even invited him to the White House to make him the first ever person to have permission to skateboard on White House grounds. He now owns the skateboard company, Birdhouse, and is the founder of the Tony Hawk Foundation which constructs skate parks in underprivileged areas. He also saw major success with his skateboarding video game series that also bears his name. The picture is a valuable insight into the first years of a current legend’s career.

Be sure to see our complete collection of Rare Celebrity Photos from the Past.