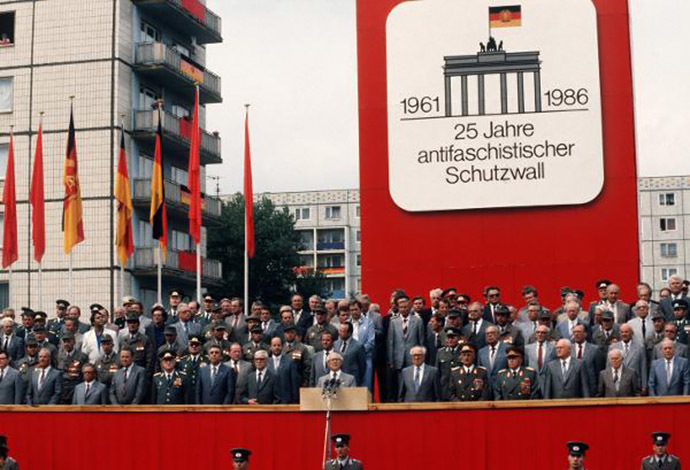 A ceremony is being held on the East German side of the Berlin Wall in 1986 marking 25 years of the separation of Germany.

The above photograph details a time of great division in our world, the Cold War. It is a picture of many important Soviet and West German political officials, including the leader of the Soviet Union at the time, Mikhail Gorbachev, attending a ceremony to celebrate the creation of the famous Berlin Wall that had split the country of Germany in two for twenty five years at the time it was taken.

The wall was first constructed in the year 1961 as a means of keeping separate the two halves of Germany that were already divided by their differing economic systems. After World War II, Europe and the United States were set in charge of rebuilding the western half of the country, implementing their favored economic system, capitalism. On the other hand, the USSR and other eastern nations were given the task of rebuilding the east side, implementing their favored economic system, communism.

Great hostilities arose during this period of division. Each side was quite wary of the other’s capabilities, forming a relationship with no trust. This all culminated with those in charge of the eastern half of the country deciding to construct an enormous wall in hopes that it would keep each country out of the others’ business and stop citizens from crossing over to each side. It was viewed as a symbol of the futile divisions the Cold War had brought about in our society, and as such, the cry to tear it down was immense. The wall would eventually be deconstructed at the end of the Cold War in 1992, ushering in a new era of a more united world.