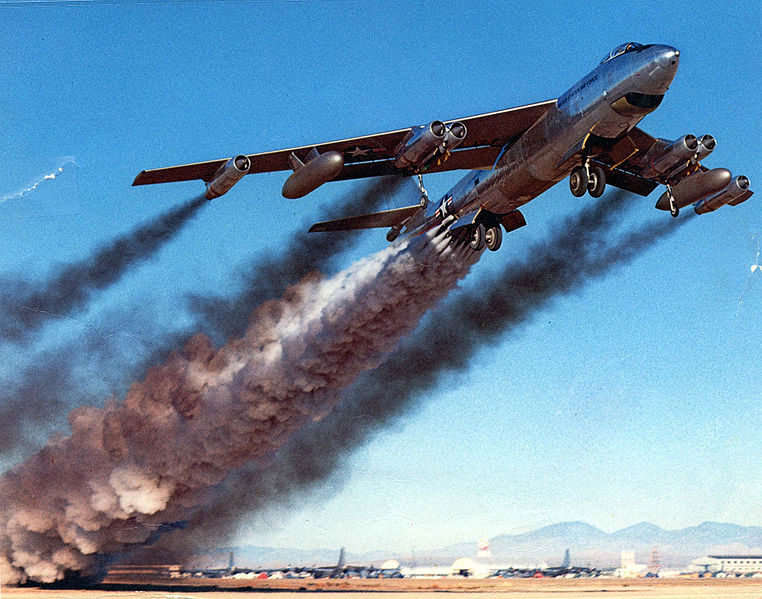 Here we have a picture of a Boeing B-47 Stratojet utilizing a rocket assisted liftoff. Jets like this one were mostly utilized during the Cold War era as the United States’ primary method of dropping nuclear bombs should negotiations fall through.

Dubbed Stratojet because of their purpose to remain high in the stratosphere for long periods of time, these jets utilized six engines to help them keep flying high for extended durations of time. Introduced in 1951, the Boeing B-47 Stratojet was built to be the most advanced feat in aerodynamics at the time.

This was one of the first combat jets to put the engines underneath its wings to help its aerodynamics. Having such an aerodynamic design caused some observers to consider it the sleekest looking plane at the time. Being a bomber, however meant that it needed to be able to carry tremendous weights for its intended journeys. This is where the rocket assisted liftoff came in to play. Using this method, even the heaviest of loads could be sent airborne.

Keeping high above the clouds meant these flyers had the keen advantage of being able to keep off enemy radar. Enemy interceptors would also be unable to chase after them at such high altitudes. Thankfully, none of them would ever have to drop their destructive cargoes. It is estimated close to 2,000 of these machines were built throughout their time in service but their legacy lives on as the design would inspire the early concepts for modern jet airliners. These bombers remained active until 1965, afterwards being repurposed into recon crafts.