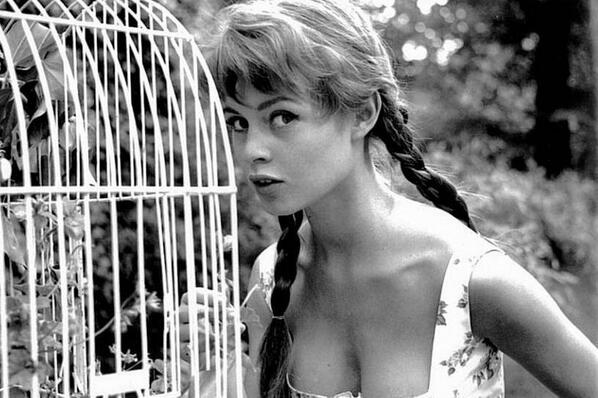 A photograph of a young Brigitte Bardot next to an empty birdcage.

Above is a photograph from the history of international films. This is Brigitte Bardot, one of France’s most famous movie stars, in her younger years. It is estimated this photo was taken in her late teens before her rise to fame, but the exact time and place of this picture are currently unknown. Bardot was born in Paris in 1934.

Throughout her early life, she studied dance, especially ballet. She made her film debut in the year 1952, at only eighteen years of age, by appearing in the movie, Crazy for Love. At this point in time, Bardot would go on to act in an entire seventeen films just from 1952 to 1956 with only one of them gaining much exposure for her career. It was a movie called And God Created Woman at the end of this period that brought her into the limelight and cemented her as one of the world’s favorite international movie stars.

Bardot quickly became America’s favorite French actress because of her bewitching looks and impressive acting skills. She put this publicity to good use as in 1973, she decided to work towards helping promoting the rights of animals. Living life as an animal lover, she saw the poor treatment of animals in the world back then and felt she should do something to help. Continuously she would attend fundraisers and meetings to promote her agenda. She has also been politically active against such groups as she has branded harmful to animal rights. To this very day she is continuing her battle and shows no signs of slowing.