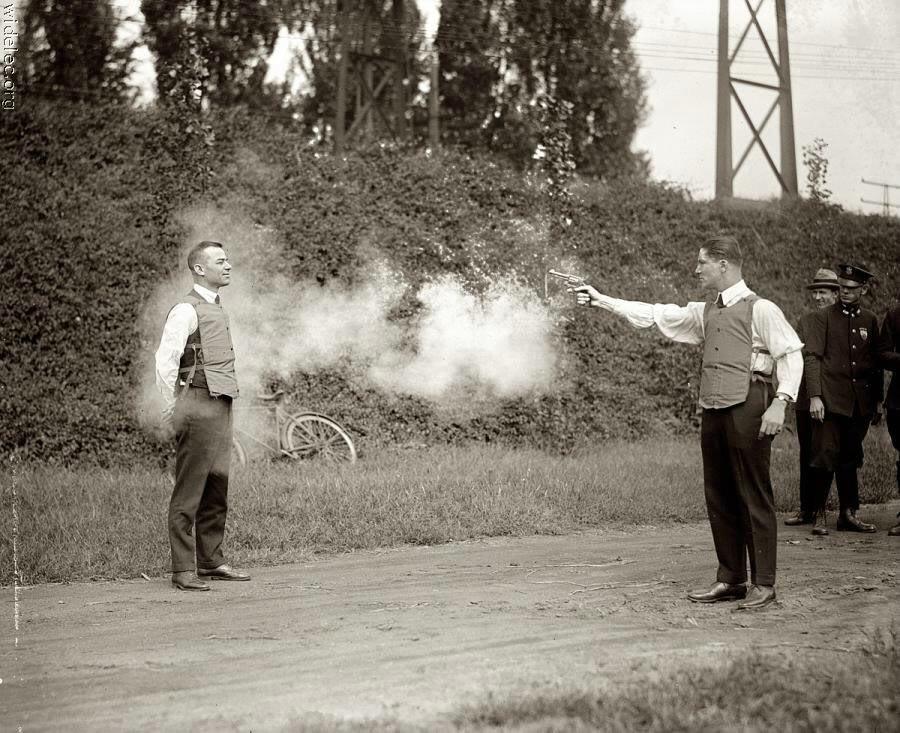 The picture below is a 1923 photograph of a bullet-proof vest prototype being tested the hard way in Washington D.C.

Back in the days of less safety technology and more lenient laws regarding human endangerment, this would be a perfectly acceptable way to determine whether or not a bullet proof vest design would work. We can see the two inventors of this particular design facing each other with the upmost confidence in their technology as they each wear a vest and one shoots the other to demonstrate the effectiveness of their product to the police in the backdrop.

The first recorded concept for a bullet proof vest created as far back as 1538 when legendary armor-maker, Filippo Negroli, was commissioned to manufacture a set of armor that would be able to survive a round from a pistol of the era. Most designs of bulletproof vests throughout history have consisted of a soft first layer to absorb some of the bullet’s kinetic energy followed by several solid layers to stop it from penetrating deep and harming the wearer.

The original designs were continuously improved upon and during the era of the picture, a majority of vests focused more on utilizing more soft layers than hard ones to help absorb impact from gunfire. Although most use of bullet-proof vests were legitimate, such as use by the police or the military, around this this time gangs and the mob began to take stock in the protective ear to defend themselves from law enforcement or rival gangs.