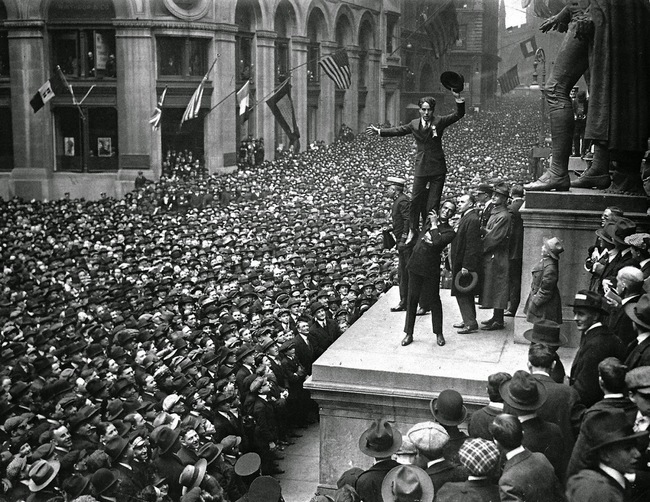 Above is a picture of comedian Charlie Chaplin in the year 1918 as he stands in front of an enormous multitude of people on Wall Street in New York City. He is being held up by the famous director of the era, Douglas Fairbanks in an attempt to let the entire crowd see him.

The two showed up here on this day in an effort to promote Liberty Bonds to the various higher-ups and brokers of the economic center. Chaplin, one of the most notable comedians of the early 1900’s, was a star of black and white films, both with and without sound. He is often accredited with the popularization of films because of how universally loved his comedies were. Movies such as, “The Gold Rush,” “The Great Dictator,” and “A King in New York,” were some of his most beloved works and what landed him in the public eye.

Fairbanks was a director of some of America’s first movies. Mostly working in silent films, Fairbanks was considered a master of displaying characterization before dialogue could even be achieved on screen. A good majority of his movies were tales of rogues and swashbucklers, such as, “The Three Musketeers (1921),” and “The Mark of Zorro.” Although the pair would never directly work together on a film, they did start a film company together in the form of United Artists. Chaplin and Fairbanks were good friends throughout life and decided together that they should use their combined popularities for good purpose and so they toured the country selling Liberty Bonds to support the country during WWI. As seen in the picture, the tour was immensely successful, garnering considerable support from patriotic movie fans.