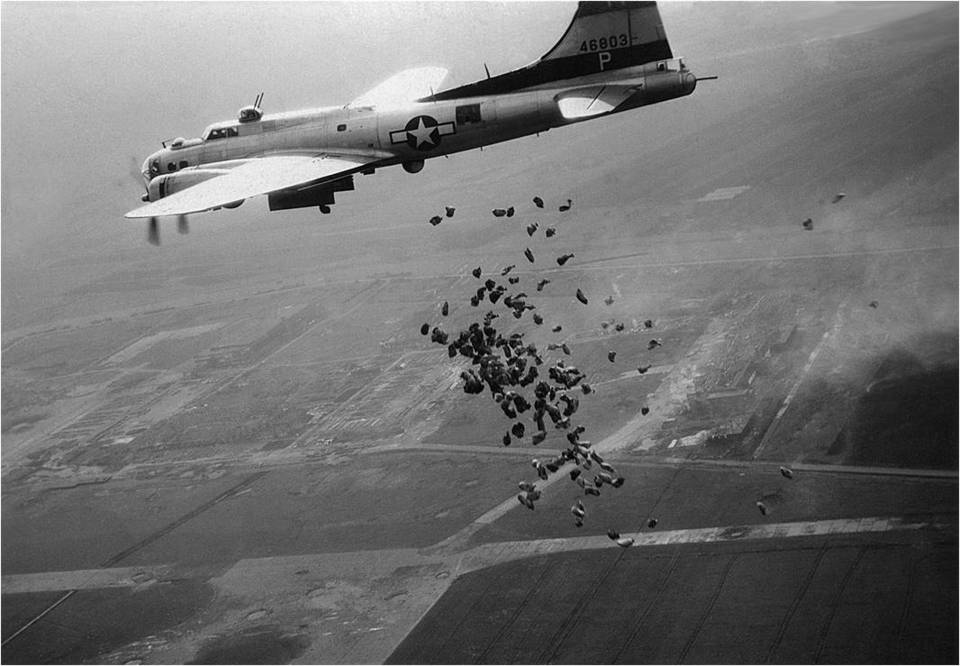 Above is a photograph from the WWII era, specifically the year 1945. It shows an American B-17 as it is dropping a load of food to the people of the Netherlands below.

At this time, German was still in control of the area, causing harsh regulations that nearly starved the citizens. The Allies’ response was to have pilots from the U.S. Air Force and R.A.F. air drop food to the people from flying altitudes. Through negotiations between the Allies and Germans, it would be determined that there would be a treaty for the Germans to not attack the participating aircraft so long as they were only in the specified areas and merely dropped food then immediately left. This operation would be codenamed Operation Manna and Operation Chowhound. Operation Manna was the name for the part of the operation that would be carried out by the R.A.F. with their air drops while Chowhound was the name for the Americans’ effort. This combined task would go on from April to May of 1945 and would drop and estimated 11,000 tons of food to the poor suffering Dutch below.

Unfortunately, even this astronomical sum of food just wasn’t enough to feed the country. Because of this, a third supplementary operation was needed. This one would turn into Operation Faust. Faust would differ from the other two by utilizing a ground-based approach. Trucks would be employed to sneak behind the lines of the German-occupied country and supply the citizens before they were spotted. Thanks to these operations, many lives were saved and the Netherlands were able to be rebuilt to their former glory with the end of the war just weeks later.