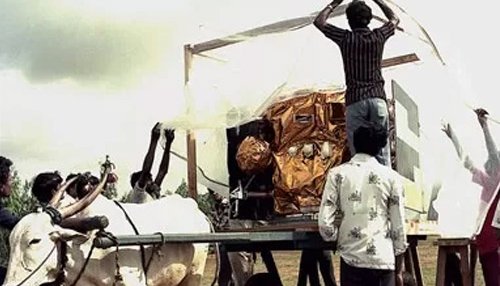 Below is a picture that has a startling contrast between its two main features.  First is a simple ox-driven cart, second is the cargo it is carrying which happens to be a satellite that was extremely high tech for its time.

We see technology of both the old world and the new coexisting in this single photograph. The picture comes to us from India in the year 1981 during the early days of India’s space program, the ISRO (Indian Space Research Organization). The satellite they have is called the APPLE satellite. It is a communications satellite meant to help broadcast television broadcasts and send transmissions for future ISRO space endeavors. APPLE stands for Ariane Passenger Pay Load Experiment.

As for the cart, it should be noted that the reason it is employed in transporting such a delicate piece of equipment is not that they couldn’t afford or even find a truck. Trucks and other transport vehicle were quite common in India in the 80’s so there must have been a reason they would prefer a simple wooden cart over a specialized hauling vehicle.

That reason is quite simple actually. Because the satellite and its antennae are made out of metals, the satellite can conduct electricity. In order to minimize the risk of any electrical damage coming to their prized satellite, the ISRO utilized a cart made solely of wood. As wood does not utilize or conduct electricity, the sensitive equipment on the APPLE satellite would be well protected against electric shock.