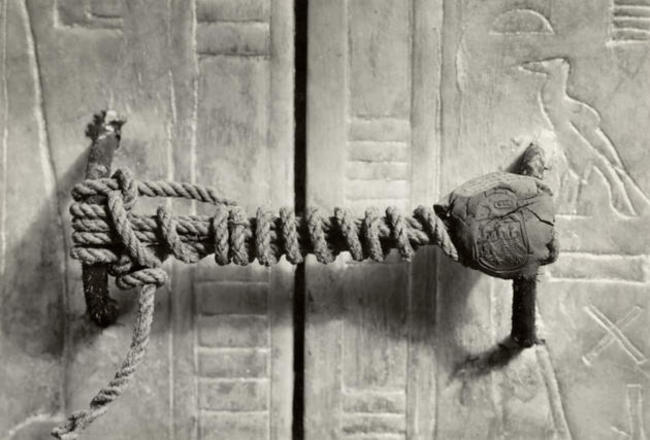 The Seal of Tutankhamun’s Tomb.

The above picture is a truly fascinating capturing of one of the most important archaeological finds of the previous century. This picture shows the seal that was used to keep King Tutankhamun’s tomb safe from the outside world.

A mere rope, yet this acted as the seal that would protect it from grave robbers until Howard Carter would discover it in 1922. The site of Tut’s tomb would be designated as site KV62 for the excavation of its relics. The seal actually sealed only the doors to the innermost chambers of the tomb, containing the actual mummy and sarcophagus. The outermost chambers had been looted, actually, but a majority of the important relics were still intact and present. The tomb had been discovered after a set of stairs was discovered underneath a village of huts. Carter quickly hired a team to clear the stairway to get to the bottom of it and found at the bottom a structure that had the name of Tutankhamun on it.

After contacting his boss, a man named Carnarvon, they began to open up the tomb that they now realized had been resealed centuries ago. Although many treasures had been burgled already, some of the items that had been left behind were of immense value to the archaeologists. Vases and human remains especially were excellent findings. Eventually, after carefully excavating room after room, the team eventually would make it to the undisturbed center rooms with the mummy of Tut himself. Many treasures were also found here, making King Tutankhamun’s tomb one of history’s greatest finds for Egyptologists.