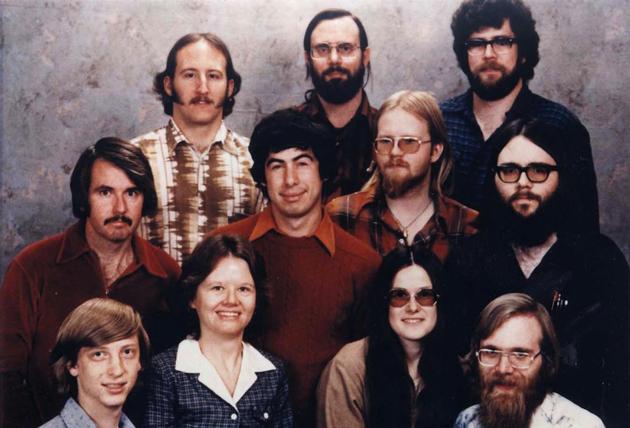 The photograph below is a picture of the very first employees of Microsoft in its fledgling days.

We see Bill Gates the original founder of the company, in the bottom front left, along with the original team of programmers who would go on to grow this garage-based company into the corporate giant that it is today.

The picture was taken in 1978 just as the team was getting started. They had no clue that their efforts would have so great an impact on the world of technological advancement as they did end up having. Back in these early days, it was Gates who was in charge of the team as head programmer and the rest are his associates at the time. The group met at Harvard in a time when computers were space-age technology to the common man. It was their goal to put an end to that notion, to show the world that computers were very useful to everyone and make it possible for everyone to own one.

Microsoft began in 1972 when lifelong friends Paul Allen and Bill Gates decided to try and utilize their shared skills with computer programming in order to make a business for themselves. After many successful products throughout their early years, their abilities were displayed to the world of computer technologies. Gates was later named CEO of the company after they got their first huge success in business. Currently, Microsoft is one of the most successful software and hardware companies still around, making such products as Microsoft Office, Xbox, and Windows.