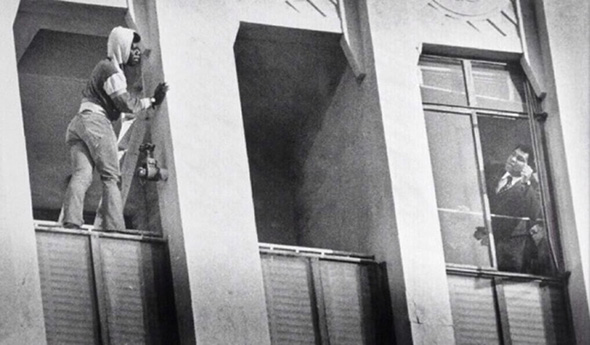 Muhammad Ali Saving the Life of a Jumper.

With the recent untimely passing of the boxing legend, Muhammad Ali, it seems appropriate to not only celebrate the man’s stellar career as an athlete, but also his incredible humanity. The photograph above is a picture of Muhammad Ali as he helps police to stop a suicidal man from jumping out of a ninth story window.

In Los Angeles back in 1981 when the picture was taken, the man climbed out onto the ledge of his apartment building claiming he was “no good,” that he, “deserved to die.” Police were immediately called to the scene along with EMT’s and even a minister. Multiple attempted to talk him down from the ledge he had placed himself upon, but to no avail. There seemed no hope to save the poor soul, until a hero appeared.

Ali had simply been in the neighborhood when he noticed the intense commotion. According to eyewitnesses, Ali approached the police coolly and asked for a chance to help, a request they granted. Ali climbed up the fire escape near the man, as seen in the photo, and talked to the man, saying, “I’m your brother, let me up. I’m your brother.” The man agreed after recognizing the heavyweight champion and agreed to hear what he had to say.

After approximately twenty minutes, Ali and the man came down from the ledge unharmed. Ali visited the man in the psychiatric ward he was taken to. Ali will always be remembered as one of the greatest boxers of all time, but it is even more important that we remember him as he is in this picture, a true hero.