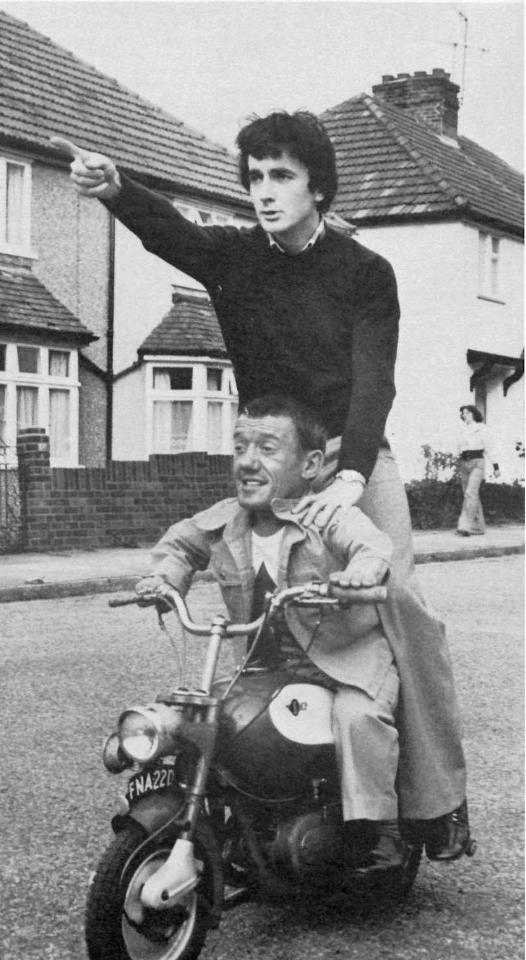 This iconic photo is of two of the most fan favorite characters to ever grace the big screen, but most viewers won’t recognize them out of costume.

The driver of the motorcycle is Kenny Baker and his passenger is Anthony Daniels. They are, respectively R2-D2 and C-3PO, the lovable and sometimes quirky droid pair in the Star Wars Universe.

This picture, shot in black and white shows the famous duo in a rare out of costume moment together. The actors have famously (or infamously) not gotten along, and are the only two actors to have appeared in all 7 Star Wars films to date.

From our research, this is a  publicity photo for the original 1978 film Star Wars Episode IV: A New Hope, which attempts to show the two in a bit of off screen fun, with Baker piloting a miniature motorcycle with Daniels as his passenger, standing on the back pegs, and pointing to something in the distance over Baker’s head.

Baker’s grin appears strained in the photo, as if it is a physical exertion to smile, while Anthony Daniels’ face appears to have no emotion whatsoever.