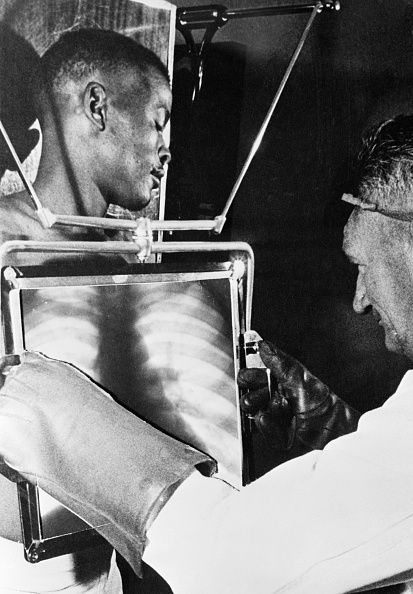 Diamond miners in Kimberly, North Africa get x-rayed before being allowed to leave.

Above is a photograph from a diamond mine in the town of Kimberly in South Africa. We can see a miner having to go through an x-ray before he is allowed to leave his work. This was a common practice during this time in mines that were located in poverty-stricken areas.

The owners of the mines were afraid that their poor workers would be tempted to steal products that they mined up, so thorough inspections were put into place to make sure no one could make it out with any of the gems. Some workers found that if they merely swallowed the smaller gems they collected, they would be able to smuggle them past the body checks. When the owners found out, they went to such drastic measures as forcing every worker to pass an x-ray examination to make sure there was nothing of value that they were trying to steal.

Specifically, this picture was taken in the famous mine known as “The Big Hole.” Owned by the De Beers Group, the Big Hole is so named because of the massive crater it has formed right around the town. This is one of the now very successful De Beers Group’s first diamond mines, helping them to secure their fortune in the early days of their business. The Group was founded by Cecil Rhodes and Alfred Beit and has been the subject of some controversy over whether or not they have a monopoly over the diamond market in the past, as well as claims that practices such as the one pictured above are unethical and should be stopped.